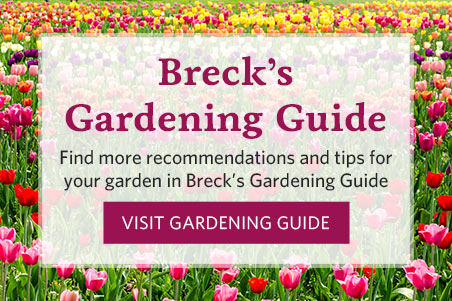 Instructions & Tips for How to Grow Dahlias

Dahlias can be started indoors in individual pots with damp peat moss and vermiculite. You must use caution when transplanting them outdoors. Plant dahlias outdoors after all danger of frost has passed. When it comes to growing dahlias, choose a sunny site with well-drained, sandy soil. Dig a hole a little larger than the 2" you'll need to plant the Dahlia. Amend soil with peat moss or compost. Replace about half the soil, then place tubers flat and cover with remaining soil. Space tubers 12-36" apart depending on variety. Water after planting and not again until shoots appear. Stake plants. As plants grow, increase watering. Fertilize sparingly. Pinch and disbud dahlias for later and larger flowers. Buds tend to grow in threes; two-sided ones should carefully be pinched to develop the central bloom. This is especially important with border or pot plant dahlias. If the plants are not pinched back, they will not retain their low compact size.

While the roots of dahlias are usually called bulbs, dahlias are really tubers (tuberous begonia) and can usually look like brown carrots. Stems from dahlias also sprout from the tubers. Dahlias come in a variety of colors. You can choose a white dahlia flower to plant in your garden or from a selection of colors from red and pink, to yellow and orange dahlias. Dahlia flowers can also range in sizes from just two inches to over fifteen inches in full bloom. Some varieties of dahlias can grow to be over four feet tall.

What to do when you receive your dahlia tubers

Your dahlias are shipped as tubers. The tubers are field grown and have been harvested recently.

If you don't have time to plant immediately, keep the dahlia tubers in their original bags at about 40-45°F (4-7°C). The vegetable drawer of a refrigerator is ideal for temporary storage. Quick planting, however, will yield the best results.

Dahlias are frost tender. Your tubers can go directly into the ground in the spring after the ground has warmed and the chance of frost has passed. One good guideline is to plant dahlias at the same time you would plant tomatoes. If you want early blooms, start the tubers indoors in good light about a month before you plant them outside. Dahlias can be planted as late as mid-June in most parts of the country. 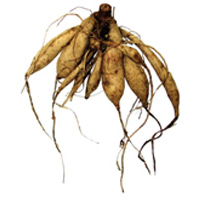 Where to plant dahlias

Choose a site with the following characteristics:

Full sun produces sturdier dahlias, but sites with morning sun and afternoon shade, or dappled sun throughout the day, are also acceptable. During the summer months, make sure the soil does not dry out; insufficient moisture causes slow growing dahlias, fewer flowers, and yellowing of the foliage. Dahlias are tolerant of a wide range of pH, and adjusting the pH is normally not necessary.

When to plant dahlias

You should plant your dahlias after the last frost date, once your soil has warmed. Dahlias are known to struggle in cold soil so it's important that your ground soil reaches a minimum of 60°F before planting them.

It is worth taking the time to dig a proper hole and amend the soil. You'll get bigger, healthier plants with more flowers.

Spade or rototill the soil to a depth of 12-15". Mix in a generous, 2-4" layer of dehydrated manure, garden compost and Breck's® Food for Bulbs and Perennials. If your soil is already a rich garden loam and well-drained, the addition of Breck's Food for Bulbs and Perennials will provide the ideal conditions recommended by Breck's Dutch bulb experts for superior growth and blooming. If you have clay soil, which is a heavy soil, you may need to amend for drainage. A good solution is to mix compost, sand and rock dust or crushed stone into your soil. If you have sandy soil, amend with compost and possibly clay to increase the retention of nutrients. This will also help retain moisture.

How to plant dahlias

How to mulch dahlias

A thin layer (1-2") of mulch (compost or a commercial type of mulch) has a positive effect on your dahlias by retaining moisture, maintaining a more even soil temperature, providing organic matter for an optimal soil structure and reducing weed growth. It also prevents soil from splashing onto the flowers and foliage.

How to fertilize dahlias

A surface application of Breck's® Food for Bulbs and Perennials at planting time is recommended. In poor soils, plants may benefit from a second application in early to midsummer. If natural rainfall is less than 1" per week, additional watering is recommended.

How to pinch dahlias

Though dahlias will grow just fine on their own, pinching will give you a stronger, bushier plant with more flowers. The best time to pinch a dahlia is when it's between 12-16" tall and has at least four sets of leaves on the center stalk. Locate the upper-most sprout on the main stem and remove it with your fingers or a pair of scissors. Take care not to damage the stem or nearby leaves.

If you want the largest flowers possible, you should not pinch. For this purpose, remove axillary shoots. This allows the main flower to blossom to its fullest potential. Just pull out the buds that are growing next to the main flower.

How to Stake Dahlias

How to deadhead dahlias

We suggest removing spent flowers on a regular basis, for instance, once a week to best care for dahlia plants. Deadheading encourages your dahlias to put their energies into producing more flowers, thereby promoting an extended display of form and color in the garden.

Dahlias make excellent cut flowers. The ones best suited have a vase life of 7-10 days. Pick flowers that are nearly or fully open because the buds will not open once they're cut in most cases. On warm days, harvest early in the morning or late in the afternoon. Strip off all leaves that would be below the water line in your vase. Nutrients for cut flowers (floral preservatives) stimulate the flowers to open, extend the vase life and keep the water in the vase clean.

How to plant dahlias in pots

When are dahlias in season?

Dahlias are in season between the months of May and October.

When do dahlias bloom?

Dahlias usually bloom eight weeks after planting and during mid-summer and throughout the fall season. Some also say that if you're able to grow tomatoes in your garden, that you'll be able to successfully and easily grow dahlias as well.

Are coffee grounds good for dahlias?

How to treat common dahlia pests and diseases

Bait two weeks after planting and continue to bait throughout the season. A few organically friendly methods that work for us:

Spider mites can be controlled using horticultural oil. The best way to avoid thrips is to remove weeds and grass from around garden areas to eliminate alternate hosts.

These pests can eat dahlia petals, although they do not hurt the plant itself. Spray with insecticidal soap if damage is a real problem.

Spray your dahlias with a garden hose, being sure to get the undersides of the leaves.

While dahlias are not "deer proof," they are low on the deer's list of favorite foods. In some parts of the country, they are considered deer resistant--probably in those areas where the animals find enough other plants they prefer to eat.

This condition commonly shows up in the fall. To prevent it, spray with ¼ teaspoon baking soda mixed with 1 quart of water from late July to August. Spraying plants weekly at the first signs of infection can protect plants against further damage. 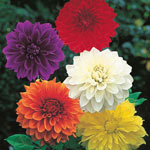 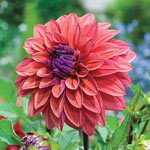